So much for house cleaning 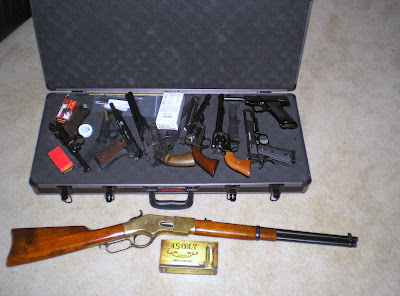 I didn't have to work for the weekend and planned to clean the house. Fortunately for me, my buddy from work called and we went to the range instead. I tried out his AR and we fine tuned the scope on my AR. God I love that scope and rifle combo. Holding tight groups at the hundred yard and able to see the hits extremely easy. After shooting at the range for a while, we moved over to cowboy town to play for a while. Took out the Uberti 45 colt 1866 lever action for a little distance shooting. Blew the cobwebs out of the army open top and schoefield as well. I need to load some lead .45 acp so I can shoot my 1911 out there. I have the die sets and components. I just need to load some. They have a whole slew of new targets out at cowboy town. They added steel buzzards to the list of targets to choose from. No zombies yet. My buddies fiancee showed up for a little at the end. She really enjoyed shooting the rifle. Don't think she liked the 1911 too much. Just a little too much kick for her. But she did really well with the lever action on the 100 yard targets. She was having a really good time. It gets dark way too early this time of year. You have to stop shooting a half hour before dusk. All in all it was a great day.

I hit the gun store to check out sights for the new AR. He didn't really have what I wanted. He had a nice scope, but I am leaning towards a red dot sight. The red dot he had was priced at $480. Quite a bit more than I was thinking of paying. I will do some searching and figure out what I want. The $200 credit is only good at that gun store, but he can order whatever I want. Just have to decide what I want. My buddy had a front grip that turned into a bipod. I liked it, so it will be going on my shopping list.
Posted by RichD at 7:36 PM