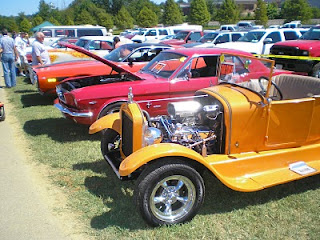 Well, I went back to the car show and picked up my HEI conversion kit and other miscellaneous parts. Unfortunately they gave me the wrong coil for it so I have to go tomorrow and exchange for the proper one. I did not notice that I left the house minus my camera so there are no new pics for today. I did get some tips from one of the vendors on welding in the floor pan. The sales corral had some new additions. Today being the weekend, there were a lot more people in attendance. You almost need a map to find your way around in there. I could not find the booth with the frame coating I wanted yesterday. Might have better luck tomorrow. Only one more day of vacation, but there is a long weekend coming up next week, so that makes it a little more tolerable. I put the conversion kit in the distributor. I need to get a new o-ring when I get back to work as the old one is over forty years old and not to pliable.
Posted by RichD at 7:46 PM No comments: 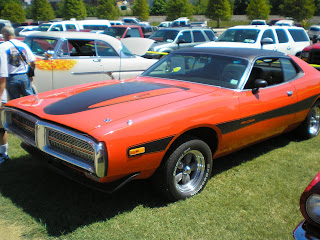 Got up early and went to Frog Follies this morning. What a beautiful day for it. You couldn't ask for better weather. I found a full floor pan for the mustang and another guy has the conversion kit for HEI ignition system. Typical luck though. I have to look at distributor and see which of the two ford used on mine. Apparently, my car is a borderline changeover year. I found out yesterday that the engine mounts I ordered for it are the wrong ones. Mine use the 1964-1966 ones instead of the ones for 1967. I will go back and get the parts over the weekend. Gives me an excuse to go back and gawk at the nice cars some more. 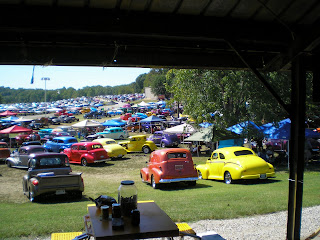 FlamingRiver had a booth set up there. I was able to see their latest steering gear for the car. It has the flaming river manual steering upgrade and it looks to have an after market steering column. The guy showed me what to look for to see if it is one of theirs or not. It has some slop in it, so if it is one of theirs, he said even though I did not purchase it new, they could still work on it and fix it instead of me buying a new one. 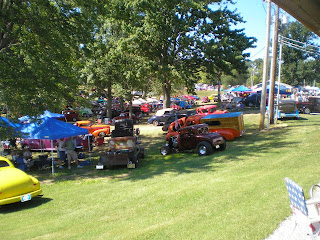 I got a chance to look through a lot of tools and bought some odds and ends in the bargain bins. They had some nice cars in the sale corral. I just don't have the room at present for any more toys. They had couple mustangs for sale, but they were in really bad shape. I did see a really nice Bronco there. I only work about 4 miles from home now, so mileage wouldn't be an issue. I always liked the old Broncos.  I found some info on chrome platers and powdercoaters as well as upholsterers while looking around. Did not find shifter console, but I will keep an eye out in the future. One will show up eventually. 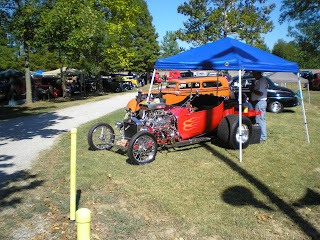 Still have to determine what to do over weekend. Have the Indy gun show going on, and I definitely want to hit the car show again. It was a blast. I stayed until they were closing some of the sales tents and it appeared most of the cars were getting ready to go on a cruise. It was pretty neat, when I left the show, the old cars were everywhere you drove in town. There are thousands of them. One of the attendants at the gate said as of midday, they had 5000 registered so far and they were still coming.
Posted by RichD at 6:37 PM No comments: 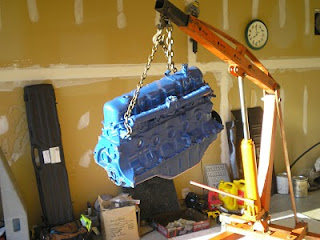 Well, I finally got the motor back today. I lucked out and walked into the shop while they were putting the final touches on it. The kid working on it offered to deliver it for twenty bucks. I couldn't rent a truck for that. I gave him forty and still consider myself money ahead. Motor looks good. I will assemble clutch and install tranny to motor tomorrow. I don't want to install motor until I get the floor pan installed. I removed the carpet and cleaned up the area. Tomorrow, I will go to Frog Follies in the morning, and cut floor out in the evening. Still need to line up and see if anyone is going to Indy gun show and what day so I know how to plan weekend. I am hoping on getting floor welded in this weekend. I am still working up the nerve to try welding it in myself as opposed to taking it in. The driver side front is the only bad one. The rear and tunnel area look like new. They still have the paint on them.Drivers side rear is in great shape as well. I am still waiting on the subframe connectors to show up. They are bolt in, but I intend on bolting and welding them in. 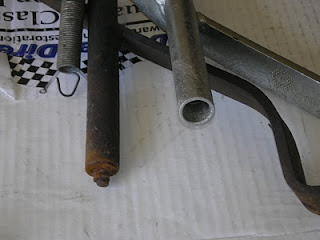 I bought a new z-bar to get the car going. Still want to go hydraulic with the clutch in the future, but this will get it to the street sooner. The old one was beyond repair. Someone welded a slug off center in it and rigged it to sorta work. I found one on e-bay to get it going. I also got a new frame bracket and new washers and bushings for it. 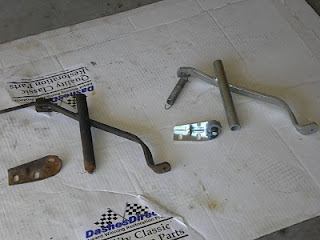 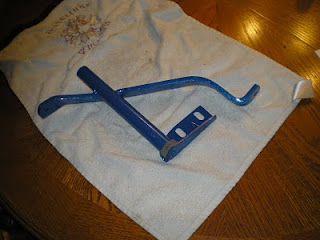 I should have some great pics tomorrow from the Frog Follies. It has to be one of the best car shows around. I am going to try to find a better shifter for the mustang while I am there. Would be nice to find a floor console as well. I need to get new carpet as well. The carpet did not come up where it can be reused.
Posted by RichD at 9:15 PM No comments:

Pics from the past project 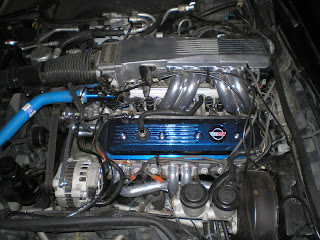 It has been too hot to work on the car, and work has been too crazy to permit the time. I figured I would post a few pics of the last project car I worked on. It is a 1989 corvette. It was similar to the stang as I did not really plan on going in as deep as I did on it when I did, but circumstances led to a new top end and clutch. It started out as my father's project which I took over upon his passing. I recovered the seats, which taught me to never undertake upholstery again. The seats have alot of tucks, each requiring a ton of hog rings to install. They turned out good, just not fun. Next up was a paint job. Guy did an excellent job. My brother later took his 72 Monte Carlo to him and it came out excellent. Got the car back from paint and went to the weekend car show in my town. Coming home from the car show, I smell coolant. Turns out it was the Vette. Crawl under and look. Coolant was coming from hole in transmission housing. I figure it is rear freeze plug since no water up above. I look at manual and see the nightmare of dropping trans and it is off to the shop. I have them install clutch while it is out. Call comes from shop. Good news, clutch done, bad news, not freeze plug, head gasket was leaking and water was traveling down through trans and coming out bottom. This is what led to the rebuild of the top end of the motor. 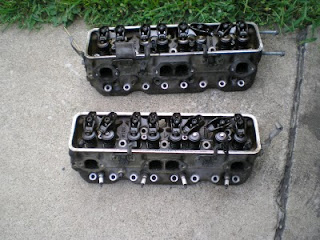 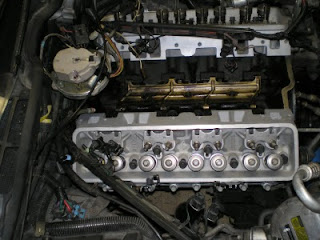 Towed  Vette home and tore into motor. She got new fuel injectors, a bored out throttle body, a new chip for  the computer, and  the air pump and all associated plumbing magically disappeared making maintenance much easier. The heads were redone and all new springs and hardware installed. Did some powder coating and ceramic coating of alot of components while apart. I polished the plenum and painted the grooves the same color as car exterior. I was able to match valve cover powder coat to match exterior color as well. The powder coater was only a block away from work, so that was convenient. She moves out pretty good now. I do need to put in a new ignition switch this winter though. GM makes it so you need to pull the column to get to it. 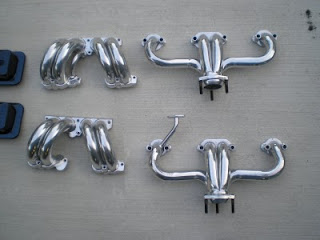 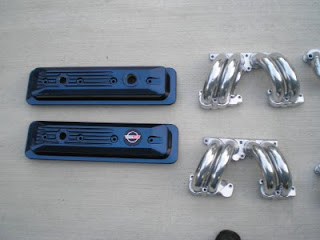 Friends of the NRA

My friend from work acquired a couple extra tickets to a friends of the NRA banquet and raffle. His cousin is a business partner and had tickets he couldn't use. It was a blast. Guns, reloading supplies, a safe and many nice items available as prizes and for auction. Saw some people from the sportsman's club there. The caretaker of the club won the safe. It is the exact model I have. It has a rifle rack built into the inside of the door. Very slick idea. Next year, I will go again, it was a blast. I am hoping on going to the annual NRA meet next year. Was planning on going this year, but couldn't get off at work. Ted Nugent, Chuck Norris and Sarah Palin were there. Just have to plan a vacation for next years meet. 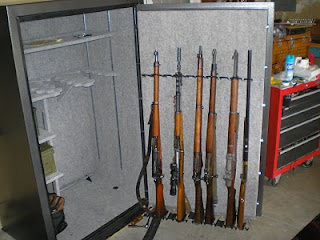 Mustang has been on hold. Work is going crazy. Working ten to twelve hours a day, seven days a week at present. At least it will help pay for the motor. A couple more weeks and it will be vacation time again. Hope to get the motor back in and start driving it. The humidity and heat have been unbearable lately. Still have welding to do, but it has just been way too hot. hope to post some new pics as soon as I get time to get back to the toy. Can't wait to drive it. Indy gun show is coming up in a couple weeks as is the Frog Follies. The Frog Follies has to be my absolute favorite car show ever. They fill the fairgrounds with vehicles 1948 and older. Stock, rods, rat rods, car parts (used and new) and a heck of a lot of project cars. I finish the Mustang, I may have to move one more time. My garage is full and I would still love to build a rat rod. Nothing fancy, just a T-bucket type of ride for the fun of it. I will post some pics of the Follies when I go. It's large enough, I usually go all three days, but I will have to miss one day to go up to the Indy gun show. Hate to miss that. Meet up with Og and my brother and hopefully see Brigid as well ( and Barkley) . It's always a good time.
Posted by RichD at 8:48 PM 4 comments: