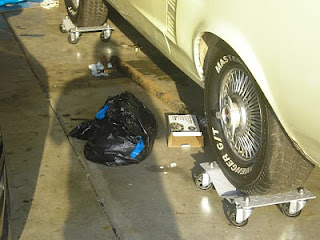 Finally got the beast up on the car dolleys I picked up at Harbor Freight. They work real well. I was able to move the car around fairly easily by myself. I pushed the car to the side and cleaned the mess up that was under it. Then I pushed it back. Tomorrow I can pull the vette out and push it back in the middle to work on it.  I want to pull the carpet and get the floor pan in this weekend. Motor should be done anytime now and I need to be ready. Seats are out,just need to pull kick panels and peel carpet up. Hoping on no rain this weekend so vette can stay outside during day and I can get some work done. I am hoping on getting the sandblaster piped in too now that compressor is back on line. Looking forward to trying new welder out.
Posted by RichD at 9:33 PM 1 comment: 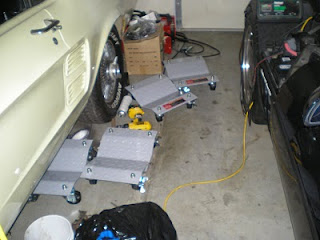 Finally got off my duff and back in the garage. Crawled under and pulled the seat bolts out and yanked the seats. I am pulling the trim and carpet tomorrow. Went to move the Vette out of the way, and found the battery completely dead. I purchased some car dollies to put the mustang on to make moving it around easier while doing work. I am anxious to see how they work out. Hope to start welding panels tomorrow once I can get car away from flammables.
Posted by RichD at 9:11 PM No comments:

Why not make our immigration laws identical to those of Mexico?  Mexican President is condeming America for racism and blaming us for the illegal full auto weapons drug cartels use. American government puts up with too much guff from this dictator. Hats off to Arizona and hopefully right will prevail. Check this link for what Mexican government does to control their illegal immigrant problem. Still trying to find those gun shops in America where I can walk up and buy full auto cool toys, no luck though. Maybe I can go to Mexico and get some : ) 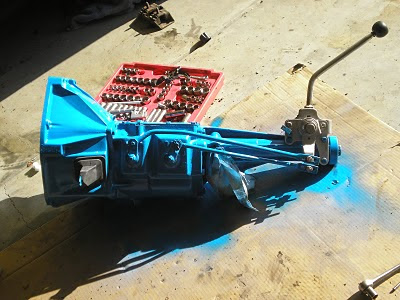 Sorted out some of the things in garage. I cleaned the transmission up, painted it and installed new boot. Old boot was gone and there was a lot of dirt and grunge in housing.I put the shifter on and aligned the linkage. She shifts real smooth now that the rust is gone and new springs in shifter. It actually centers itself like it should when released. I still need to replace seals on transmission shaft. I will get round stock at work to seat seals. I managed to pick up a helmet and some welding blankets. Should hear something from shop this week as far as when to expect motor and go over spec of what I want done. I told them to go with the new rubber gaskets as opposed to cork wherever possible. Hoping I can get a rubber oil pan gasket. They redid the valve seats to handle the unleaded gas. Back to work tomorrow. I don't know why vacations go by so quick. At least it is only a four day week. 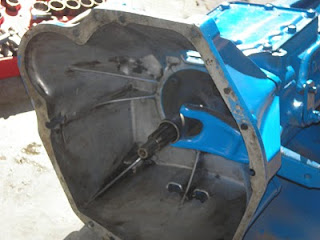 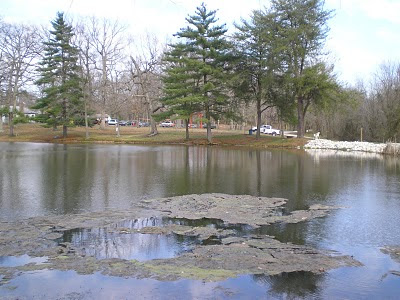 Thought I would post some pictures of the sportsman club down here. It's very close by and has a rifle range, stocked lake, Archery range, spot shoot area, clay thrower, and cowboy town. They did a nice job laying it out, and just purchased several additional acres behind range area that is currently wildlife area. Hopefully they will push range back further. It goes to 100 yard now. The NCOWS started having their shoots here a few years back, and just got done with their event a couple weeks back. It is pretty neat checking out their shoot. They dress up in era appropriate clothing and use only era correct firearms. They also set up a onsite store with clothing,gear and accessories. They set up old time tent areas and camp there for the week. 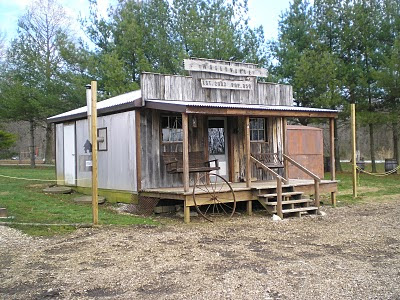 This is the building they use for the registration and scorekeeping. 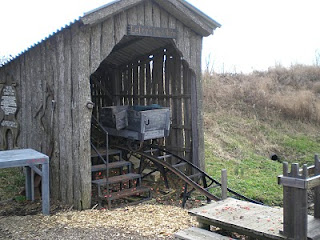 This is the mine car. It rolls down the track which is arched. Sometimes people ride in it while shooting down range at steel targets, stationary and moving. Sometimes, it is used as an obstruction to shoot around object that is in it and moving back and forth. 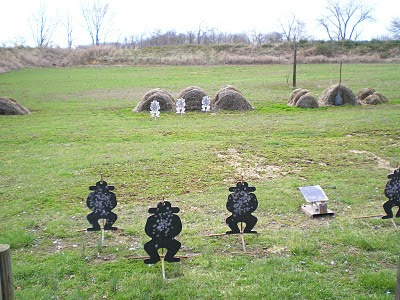 A look down range through back of saloon. 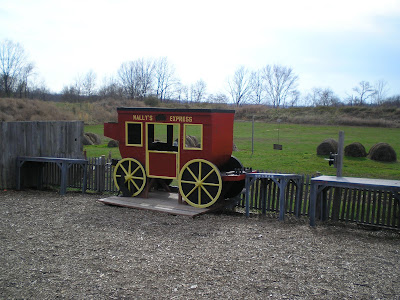 Another one of the scenarios. They have a cantina, church, train, fort,rail car,just to mention a few. 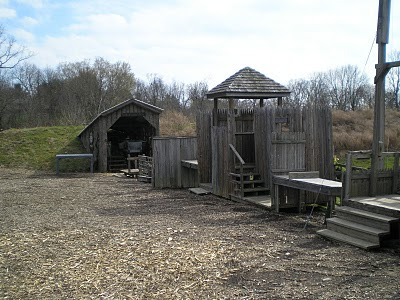 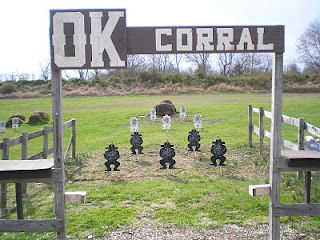 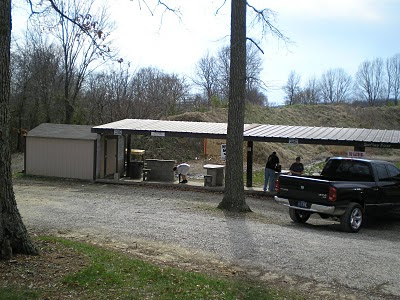 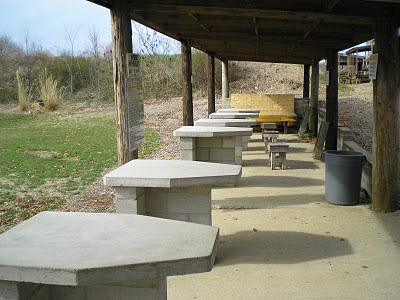 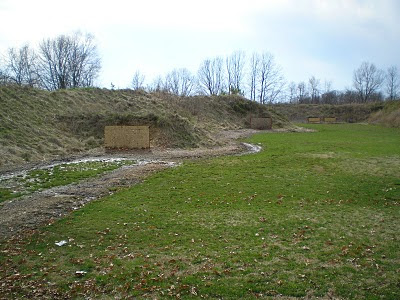 The range goes to 100 yards with a gong on the side. They put a nice shed at the end to keep targets, hearing and eye protection, bowling pins for the shoots,  rifle rests, and miscellaneous shooting gear. They also have mats in there that fit the tables to protect your gear as tables are concrete. One of the nicer ranges I have been to. It has a nice club house the members can rent out for family events and a cookhouse. A nice pavillion with lots of tables for cookouts is also available and a playground for the kiddies. They also have a nice scenic area to picnic in. I moved down here to Evansville,IN a couple years ago and a coworker was kind enough to get me in the club. They have all sorts of events going on year around.
Posted by RichD at 9:21 PM No comments:

Day at the range 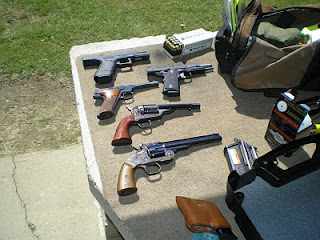 Weather was great. Had the range to myself. Finally got a chance to try out my new Colt Huntsman 22. It's a fun little plinker. Extremely comfortable and accurate. I was able to get some new magazines for it online at a decent price. They are the real Colt brand mags, so they feed as they should. Played with the glock some more. They still look awful toy like to me, but they are extremely accurate and an easy shoot. I like the feel and look of my Smith and Wesson 1911 better than the glock, but I can't get the tight grouping with it like I can with the Glock.  I still can't hit worth anything with the break top. It is a heavy gun, so I suppose I could use it as a club, or lob it at someones head as a last ditch effort. It is a cool looking gun. One of the guys at the club said he has one chambered in .44 and the only way he can hit anything with it is to aim about six inches low. The sight on it looks like half a penny. 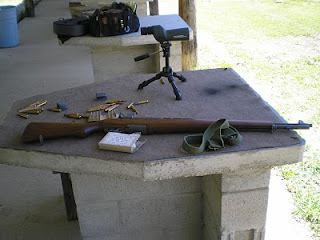 Next out was the Garrand. One of my favorites. I managed to score some Greek ammo at the machine gun shoot for it. The ammo in picture is out for my 03A4. I have the ammo in en clips for the Garrand. Found a shop down here that will buy my empty en clips, bandoleers and any other military leftovers off me. I can usually find the ammo in cans with en clips and bandoleer's, so it is good to find a source to use the empties. He has a K31 I am hoping to get. I have one, but his is mint with all accessories and number matching bayonet. 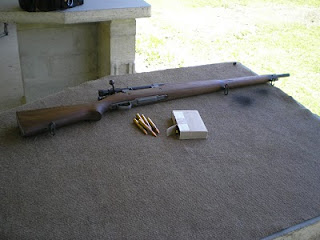 Next out was the O3A4. I finally got my laser bore sighter, and had sighted it in at home prior to coming out. It shot well for the first three shots, then was all over the place. I checked scope, and it had loosened up. I will have to dig up the locktite and get her sighted back in. 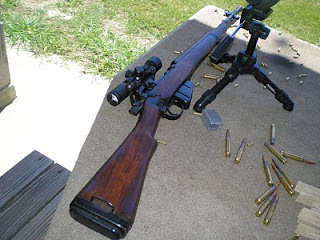 Next toy out was the #5 Enfield Jungle Carbine. I still need to find the proper rear sight for it. Prior owner put a scope on it, but as short as it is, and general build, a scope is a waste on this rifle. I will put scope and mount on my #4 Enfield. I need a micrometer type rear sight for this as that is what it came with. I will probably have to go E-bay for it as I can not find one at the gun shows (not even the Indy show).  It is a nice shooter, but kicks like a mule. It has a harder kick than the Garand by far. It's still a cool looking gun. It wasn't too popular, so it is a very uncommon Enfield. This one is genuine as there are civilian knock offs and conversions out there. I lucked out and found it at Whitaker Gun shop for only $199. Any where I see them, they start around $500. 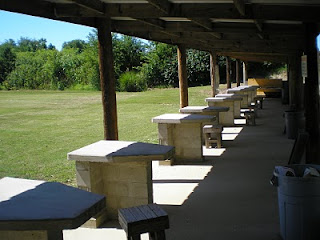 I managed to get the Engine for the mustang to the shop yesterday. I rented a truck to get it in. My buddy that was going to help get it in has been working overtime and just didn't have time when shop was open to get it in. I will probably have to take a vacation day to pick motor up. They are closed on Saturday, and close at five o'clock making pick up and drop off hard to line up if you work for a living. I have the welder now and I ran the electric for it so it has its own breaker. Hopefully start making sparks tomorrow. Have to get everything ready for when motor gets back. It was nice to get a break and go outside for a while though.
Posted by RichD at 7:46 PM 2 comments:

Glad to be a hoosier

Did not take long for Hitler Mayor Daley to try to revamp his gun control rules after Supreme court ruling. New rules include not being able to take your gun out of house, but you are required to take classes and put in time at gun range. Did I mention that the only people allowed to use ranges in Chicago are police. Kind of hard to go to range when you can not legally get your gun to a range for required training. You can have more than one gun, but only one may be operational at any given time. You may not carry gun on your property, only in your house. If they catch you on your porch or other areas of your property with a gun, you will be arrested and jailed. Gun shops shall stay out of Chicago and you have to pay a hideous permit price to get a gun. You have to register your handguns with the police. The Federal government doesn't require people to do this(yet), but the city of Chicago can much like Germany did when Hitler was in power. The city with the absolute toughest gun control laws, has the countries highest crime and murder rate. It is too bad Daley can't understand criminals do not care about gun laws. The only thing Daley does is take away ones ability to protect themselves. He is a coward that stands, surrounded by armed body guards, and tells people they have no need for guns for protection. The scariest part is, this is the cesspool that Obama slithered out of. I for one have had all the change I can handle. If they throw a three headed monkey into the running in 2012, I am going for the monkey (the three headed one, not to be confused with the current bumbling monkey in charge). The monkey in charge now wants to let the illegals stay for a price. As long as the government gets their cut (back taxes, fines), the hell with the laws.  I guess he can not understand if you give amnesty once, It sends the message that if you sneak in and stay long enough, we will make you legal. God help America because it appears to be circling the drain.

Think I will take a break from the car and garage tomorrow and go to the range and play .  Thank God I don't live in Illinois or one of the other commie states.
Posted by RichD at 10:34 PM 1 comment: