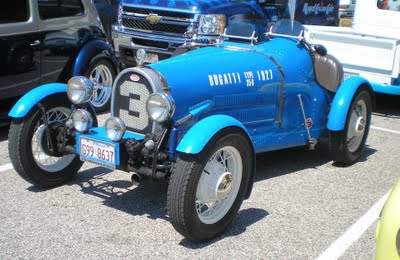 Went back for a while today. They had more vendors set up. I found a factory radio for the Mustang for $15. May put that in for looks and get one of the trunk mounted aftermarkets to actually run through the speakers. I usually listen to CD's or the Ipod , so the new trunk mount discreet units will be ideal. It will also give interior the factory look. The guy still had the pony seats, but after some research I found out the seat frames are identical , it is the foam that is different. So, I can convert my seats to pony interior, it just means I need to change out foam as well as the covers. Price was really reasonable on the seats, but they would have needed to be redone, so I may as well redo mine. Weather has been perfect. I found a company that makes an air conditioner for the Mustang that looks like the original for under $700 complete. That will be way down the line on things it needs, but I have their card so when I am ready, I can give them a call. 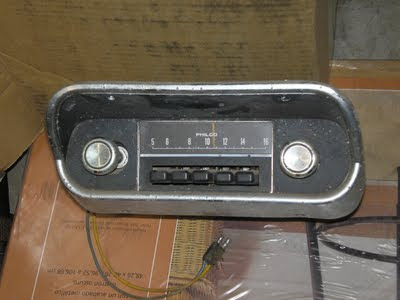 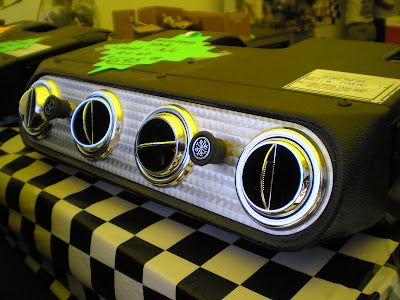 Tomorrow is Indy gunshow...What a weekend....
Posted by RichD at 4:02 PM No comments: 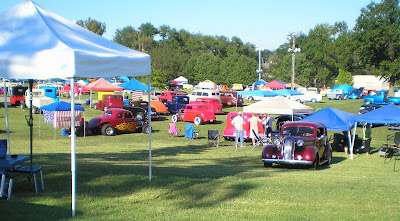 Today was the first day for the Frog Follies. It has to be the best car show anywhere. To enter a car, it must be pre 1949, but the sales corral and the vendors along with the used parts is open for anything. I managed to snag a full set of steel rims for my Mustang. Some of the rims on it don't  hold air too well on account of corrosion on the lip where it seals off. Thirty dollars for a set of four. The guy also has a full set of pony seats for it. I may whip by there again tomorrow and relieve him of them as well. I also spotted some chrome parts for my brother's 72 Monte Carlo. I spent ten hours there today and didn't get to see everything. Dropped by the Flaming River parts counter and priced out my steering column and linkage. They offer free shipping and quite a few $$'s off if you order at the show. 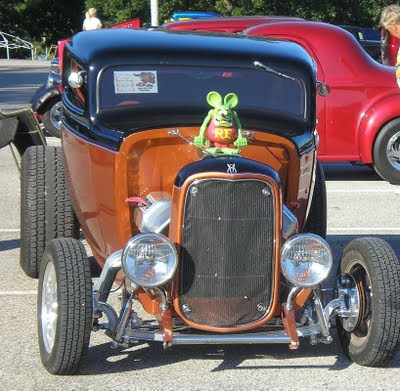 even Rat Fink showed up
I went through the sales corral where they sell the used vehicles. It is always like flashing back to the 70's again. They have old camaro's (old meaning the late 60's) and mustangs. They even had an old Ford Pinto there. They came out of the factory with rust. I honestly didn't think there were any left. 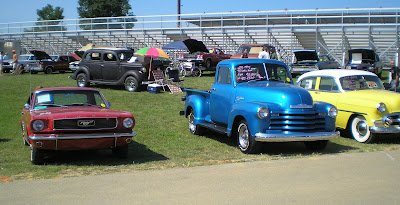 Nice cars in the corral including some ponies 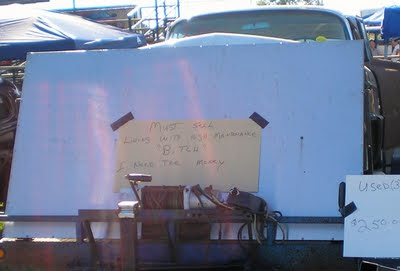 and some people with a good sense of humor 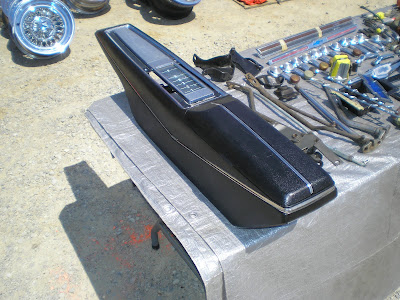 Found a console that would fit my brother's Monte, but no luck yet finding one for the Stang. Week after next starts my vacation. Should be cool enough to weld on the Mustang without dying. I picked up alot of supplies at the show as well. They have boothes everywhere with just about anything you can think of. I picked up some sanding supplies, hand tools and power tools. It was a good first day. Sitting at home relaxing, trying to get the feet to calm down. Gonna hit the show for a little bit tomorrow, but have to rest up some for the Sunday Indy 1500 table gun show and blogmeet. This is a great weekend. Going to need a weekend to recover from the weekend. Five work days left and it's vacation again. Going to go to the Patton museum and hit Merango Cave on the way back on one of the days of vacation. A lot of other ideas as well, just need to decide on what all to do.
﻿
Posted by RichD at 8:41 PM 1 comment:

One of the guys from work wanted to check out my club so he could sight in his new varmint rifle. Gave me a good excuse to break out the guns and go have some fun.  Took the Garrand out. I love the new scope and mount. It is really a pleasure to shoot now, even moreso than before the scope. I got the 03A4 sighted in again. After sealing the threads on the scope mounting hardware , she is sighted in and holding well. I am going to have to strip it down and reblue it though. NEVER EVER buy a Gibbs rifle of any type. They do a shameful job finishing their guns. The "parkerizing" as they call it, must come from a spray can as the reciever peeled in one spot. The bolt is going to get stripped this weekend as the so called parkerizing is shredding and gumming up the action. I have never seen a finish done so poorly by a  company that manufactures and restores guns. I have steered many away that were looking at them merely by letting them check out the finish on mine. It will be fine after she gets reblued, but you shouldn't have to reblue a gun that was redone a year ago.

I also took out the savage .17HMR for a little fun. My buddy from work liked it. It's the first  .17 he has shot.  He is heading out squirrel hunting next week and needed to sight in his rifles.  Was going to take him out to cowboy town for some fun, but I didn't realize I used up all my .38 lead ammo while my son was down visiting last month. Have to reload some more. He really liked the club. Told him to bring his wife out next time and see if she likes it. They have a lot to offer for very little money. Nice getting out for a while. It has been so hot and muggy out, I haven't been getting out as much as I like.

One more week until the Frog Follies are back in town. Huge car show, and my favorite car show. Indy 1500 gun show is going on as well. A lot of things packed into a weekend. Then another week after that and it is vacation. If the weather isn't insanely hot and humid, I hope to get my sheetmetal welded in while on vacation.
Posted by RichD at 8:01 PM No comments: