Had a great week off work. My son and his girlfriend came down for the week and just left for home. We went to the Jesse James riding stables in Kentucky. Unfortunately, I found my hips no longer can tolerate being on a horse. I was looking forward to riding with the kids, but it was just too painful. While the kids were out riding, I rode around (in my truck) and took in the nearby sites. They had one of those photos taken where they wore the old western garb and they print it out in black and white. It turned out really nice.  I love Kentucky. It is absolutely beautiful scenery and alot to do. It's not too bad of a drive from my house either living just north of the border. 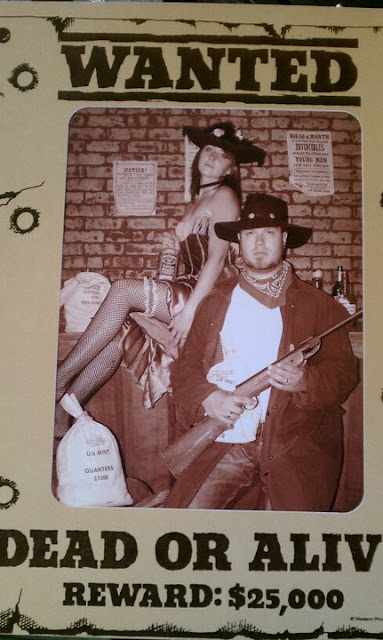 Kids showed me Coldstone Ice cream by my house. I had never been there before but am now a big fan. Ice cream is fantastic and they have a wide variety of flavors and calorie adding goodies to mix into it.

We went to my club and had a great time. My son liked my little .22 revolver enough, he bought one to take home and play with. Him and his girlfriend did really well. We tore up cowboy town for a while before moving on to the rifle range. The day they went to the waterpark, I spent at the range tuning a few of the scoped rifles in. My favorite ( my Garand) got  a scope over the winter and I had it tuned in until the bolts loosened up. I tightened them up with some goo on the threads to keep them from loosening up again. I got it shooting tight groups now. My savage .17 HMR  was off quite a bit as well. I started at the 25 yard range and got it shooting tight groups. The scope was way off. It was suppose to come in presighted. Not even close. She shoots nice now. I also played with the Ranger .22 I picked up on the cheap at the last gun show. She shoots extremely well and tight. It came with a weaver scope on it. I got her adjusted and shooting straight. The kids had a great time with them. My kid got his first experience with 30-06. When you go from shooting the .22 and the .17HMR to the Garrand, it gets your attention. I warned him it kicks like a mule, but it usually still surprised those who haven't shot one before. A couple of the guys fishing on the lake came over to see what we were shooting. One of them remembered carrying one in the war. He loved it. Had my springfield 03A4 out as well. He liked that one as well.

I didn't shoot the 03 on account of I still haven't locked down the bolts that keep loosening up, and forgot to put the thread lock in my bag. Have to take care of that before the next time I take it out. I prefer my Garrand over it anyhow. Kid brought out his 9mm Smithe and Wesson and shot it for a while. I don't care for the trigger pull on it. It has that DA long pull that is uncomfortable. He shot my 1911 and my glock. Did really well with the glock. People don't seem to like glocks, but I happen to think they shoot extremely well. It is the cheapest .45 I own, and I can shoot some nice groups with it. It is my preferred carry pistol when it is cold enough to where clothing to conceal it. Summer I have a smaller 9mm that doesn't show as bad.

Yesterday, we went to the flea market for a good part of the day. The kids like flea markets. We went to the local Amish style restaurant around here, and it was great. They bring out a platter of whatever meat you choose ( each person chooses and gets their own platter of meat of their choosing) and the rest is served family style. They bring bowls of Potatoes, veggies, biscuits, and other side items and keep bringing them until you cry uncle.

We went over to Buds Harley Davidson and drooled over the bikes for a while. Saw a beautiful heritage soft tail there that I would have loved to bring home. It was exactly the way I would have ordered it. It fit me like  a glove. Not sure I have the nerve to ride one anymore. People drive like idiots. My neighbors brother is in the hospital. He was out riding when some uninsured POS blew a stop sign and plowed him down. Messed him up pretty bad. He was wearing a helmet, but still sustained massive head injuries as well as spinal injuries and bone breaks. No matter how safe you drive, you are still at the mercy of the mentally challenged, uninsured Obama  worshipers that plaque our roadways.

Had a great time. Hated to see them go. It was fun having company for a change. Said they had a great time and might do it again next year. Still a lot of things we wanted to do that we ran out of time and didn't get to.

The rest of my Mustang parts came in, now all I need is some ambition. Only thing I do still lack is the weld through primer for priming the panels before welding. It helps protect the metal from rusting after it is in place. The surfaces that are trapped after weld and unpaintable at that point. It is also suppose to help the weldability.
Posted by RichD at 8:29 PM 1 comment: