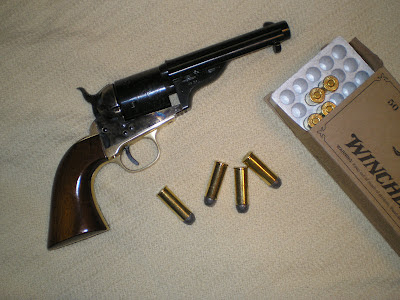 Turned out to be a really nice day outside. I hit the gun show this morning and it was actually pleasant. The crowds were gone. I looked around at a leisurely rate as opposed to being shoved through the line. I headed out to the FFL dealer afterwards to pick up the Uberti I purchased yesterday. I bumped into one of the guys from work picking up a gun he bought yesterday from Whitaker's. He lives out  in the sticks where he can shoot right off of his porch. Must be nice. The new pistol is 45LC.  I don't see any wear marks to show that it has been fired at all. It shoots nice, but it seems picky on cartridge lip thickness. Some cartridges seemed to make the cylinder drag slightly. I am going to have to run a reamer through all the primer pockets on the .45 LC from now on. I don't understand why the primers give me grief on the .45's, yet the .38's work flawlessly. The .38 revolver has more slop in it between cylinder and bullet than the .45 does, which does not help matters any. I will reload some during the week where the primer pockets are reamed out to see how they work in the revolver.

Spring spot shoots at the club start up next Sunday already. If the hours at work stay down, I should be able to get my work hours in early as I did last year. It is a pleasant way to get the hours in. Usually setting and pulling targets for several hours. Usually get there early and hit the range prior to the shoot. It is a great time. Got to know a lot of the guys that work the shoot last year, so the time goes by very well. Free soup, coffee and beer for a bonus. Early shoots, the soup and coffee are great hand warmers. This year, I don't see cold being an issue. Have to take my cordless drill out to the club during the week. The backer boards are pretty well shot through. They usually have sheets there ready to put up, but having a drill and screwdriver bit help expedite matters.