Headed to the new butcher this morning and hit the local gun shop on the way. He had a decent price on an economical shot gun. It is the Stoeger condor competition with adjustable comb, includes six chokes, and a vented barrel.  It isn't the prettiest gun. No fancy engraving, no gold inlays, but it should do well with skeet at the club and also double for a hunting gun. They also had a nice little plinker. I keep looking at conversion kits for my Smith and Wesson 1911, but for about the same price as a kit, I purchased GSG-1911. Not bad for $300 new. They had it in three flavors. Wood grip (mine), rubber grip, and tactical. The tactical had a rail and came with a fake silencer on it. Looks and feels good. Figure it will be a cheap plinker at the range and cheaper to shoot than the .45 while still being able to practice with a 1911 frame. Checked out their bow selection while I was there. They have an area outside the store where you can try out the bows. I need to do research and try out some of my friends bows before I even think about getting one. Best part of the gun purchase, used part of tax return. It is as if the Obama administration bought me a couple guns : )  That in it self gives me a warm feeling. Have to take pics of the store one of these days to post. It looks like a log cabin in and out. Has a porch with rocking chair placed for people to sit. As I stated, they have an area off porch to try out bows. The owners wife did the decor and did a nice job. It is decorated with deer heads, and rustic cabin decor. The owner and wife bring their daughter in usually. When I bought my .17 hmr last year and used them for an FFL, she was a baby napping in her stroller. Now she is a toddler wandering around the shop. The facility is very nice and family owned and operated. They were selling a lot of guns in the little time I was there. They have a full time gunsmith on duty as well. It is a pleasure dealing with them. 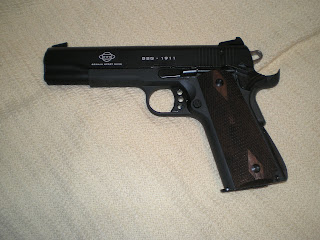 After the gun store, I headed a couple blocks over to the butcher my buddy at work told me about. It is a huge butcher shop. They have and enormous selection of meats, cheeses, wines, beers seasonings, soups, and various other foods. I picked up some sausage and some steaks. When I have more room in the freezer, I will definitely head back to stock up. Their prices are better than the grocers and the selection is a lot better. The girl scouts strategically placed their table of cookies right by the register. So as I write this, I am munching on fudge coated girl scout cookies while spike stares at me waiting for crumbs to fall. Saving the chocolate covered peanut butter ones for later. Gave spike a couple chew treats to keep him occupied for a while. The snow is gone. They have been talking snow all week. We didn't get enough to cover the grass. Just a dusting that was gone by this morning all together. Not suppose to get anymore. May head to the range tomorrow to try out some of the reloads and do a little plinking with the new toy.
Posted by RichD at 1:52 PM