Just too darn ugly not to own at least one 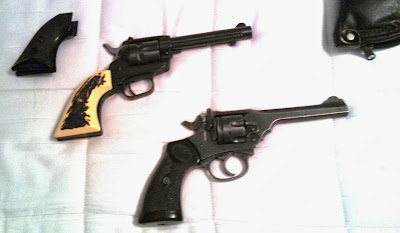 Picked up a Webley at the gun show yesterday, along with an ultra cheap .22 plinker for cowboy town. Webley came with six rounds of .38 S&W ammo. Quite a cute little round. Meant to get a picture of it next to a .38 special for comparison. The S&W round is about the length of the brass of the special. Have to see about finding some ammo for plinking. Guy I bought it from has the holster, the lanyard ring and a lanyard for it. I have to go by his shop sometime during the week to pick them up. I guess his wife isn't doing too well. He is closing shop soon and relocating to Nashville so she can be near family. I will miss seeing and talking to him. He is an older vet and has a lot of military supplies and guns. He worked in the armory when he was in the service and is a wealth of info and just fun to talk to. His kid runs the store as well, and he has odd items and antiques. It is between my house and the grocery store, so it is a fun stop off point along the way. I bought a Vietnam footlocker there a while back along with a M14 stock. His prices are extremely reasonable, and it is always interesting to see what he has. He just got a grenade launcher with dummy grenades for the garand.

Back to work tomorrow. Only five days until the weekend though : )
Posted by RichD at 9:12 PM