Whitakers guns is back in full swing....

Finally was able to hit the barber today. I was beyond shaggy and was more in the sheepdog category. The barber closes before I get home when I work late, and has short hours on Saturdays which I have been working.

After the barber, off to Whitakers to check out their wares. They are back to fully stocked. One complete aisle of AR's, both upper and lower shelves filled with every configuration you could want. They also had Magpul magazines at the normal $15 price again. So, I couldn't resist picking up a couple magazines. I was contemplating buying a box of them and putting them up for the next round of stupidity. I can set up a booth at the gun show and sell them at triple the price next time the nitwits bring up the ban, or, Hillary gets in after Obama. 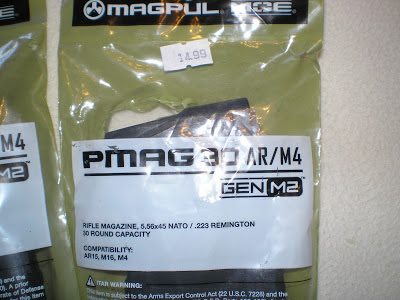 I could not leave without buying my AR10. They actually had the one with the 24 inch bull barrel that I have been waiting for. Have to pick up a couple extra mags for it at Indy next weekend as they did not have any in stock. I do have the one that came with it, but, more is better.

Still have three days left. It is almost like a vacation. I am getting use to the one day weekends. Hopefully get out to the range tomorrow. I can throw some iron sights on it for right now. Probably scope it out like the other one.

Have the Vette battery charging. Take her out and blow the cobwebs off tomorrow. Weather is suppose to be cool and sunny, then turn to rain tomorrow night. Make the most out of tomorrow. Went safe shopping some more today. Found a couple strong possibilities. Was looking at a cannon gun safe as I really like the features and the reviews looked good. When I went in to order it, the display models handle (including the shaft it mounts to) rattled in and out. I realize a display model gets abused, but, short of dropping it on it's face, the locking mechanism shouldn't rattle. So, I am back to a browning. I have one that I love, they are pricey, but they are really nice. The gun store has them a little high on price, but, delivery into the house is  $50. Movers want $300 to pick safe up and move it into house, so it will balance out. I am trying to find out if they are going to get any theftguard models in. They have the hammered finish to them instead of the gloss and the price is a little cheaper. Will go back tomorrow and see if store owner is in so I can talk it over with him and see exactly what he has and what is on the way.