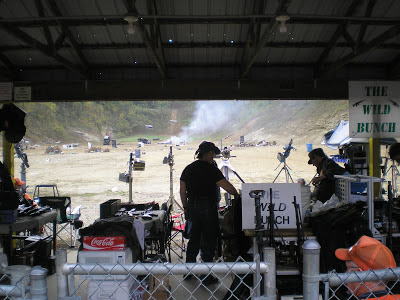 Hit the machine gun shoot this morning. As per usual, it was freakin awesome. They had the usual boats and cars spread out with explosives (just to add a little extra bang) in the pit. I shot some video of the canon with my camera, but I am having trouble getting it to upload properly. Have to get a video camera one of these days so I can get some quality videos out there. Usually don't have trouble uploading pictures, but, blogger seems to be giving me grief today. Have to try again later with other pictures. I saw a lot of interesting guns and toys, but resisted temptation. Not sure if that is good or not. No garrand ammo this time out. They had bulk 30-06 Korean, which runs a bit hotter than the lake or the Greek, but is good. Only problem was, there was quite a bit of corrosion on the lots they had out there. So, I took a pass this time around. I still have a good stock pile and will see about ordering more from CMP. I did see something I never found before. They actually had canisters of Lake City M1 carbine ammo in clips, in cardboard, in the bandoleers. I can usually find the garrand packed like this, but this is the first time I found carbine ammo like this.

Next weekend is the Indy 1500, the weekend after, is the Kentucky Expo gun show in Louisville. I went to a military show there that was outstanding. Hopefully, my brother and Og are able to attend next weeks Indy show. It is always nice to catch up with them. Hopefully, I am not working that weekend. I am hoping on getting a timney trigger for my AR. Didn't have any luck at the machine gun shoot in finding one.