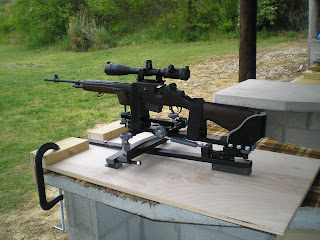 I made the wood platform to the specs of the shooting rest manufacturer. I am going to cut the plywood to fit the bench by making a couple angle cuts on back to match angle of bench. I marked wood while it was mounted. I also need to drill and put one more threaded insert and bolt in the base. The directions call out for an "optional" bolt to be put through the base under rifle butt. Without the "optional" bolt, the rest has some wobble in it. I will modify it and try it again tomorrow. Need to loctite the scope mount bolts as they keep loosening up. I hit cowboy town for a while. I really love my newest lever gun. It feeds flawlessly and is a joy to shoot. I shot out there until they were done with their pistol shoot at the range. The guys were down there talking and the M1A is rather loud, so I just shot cowboy town until they finished up. I got decent groupings at 100 yards, but without the one bolt and with the wood sticking out, it was too awkward to really hold and shoot properly. It does have a strut that absorbs all the recoil. There are provisions for removing struts and installing springs to accommodate lighter shooting rifles like .223's. She is going to be nice and solid when done. 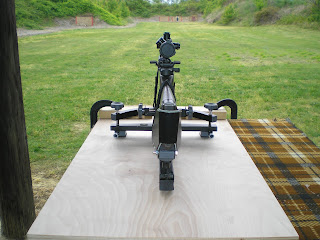 They have some things going on at the club tomorrow. I think I am just going to hit the club for the day tomorrow. I was going to go to the NRA Banquet, but my knee is acting up and I don't think I can handle all the walking. Too many years working on concrete floors and heavy lifting. I don't think knees are suppose to crackle when you bend over, but mine do. Found out the club is now a CMP affiliate. I was talking to Rob (the caretaker) and he said they are currently working out a deal for a big shipment of the 30-06 ammo. He is suppose to keep me up to date. Wouldn't mind getting several cans while they have it in stock. They are currently out of the stuff in enblocs, but they still have the ammo packed in cartons. I have plenty of empty bandoleers and enblocs to fill up. Be nice to have access to the ammo without having to wait for the machine gun shoots and hoping they have some. He said it qualifies members to buy the rifles as well, but I have a C&R licence, so I can order direct already.
Posted by RichD at 7:57 PM