After kicking tires most of the day, I brought home four of them with a F150 lariat attached to them. Found a real sweet deal on a 2006 fully loaded. Four door with black leather interior. Interior is mint. Exterior has a slight scrape on the very back of the passenger quarter panel and a few small scratches here and there, but it looks great for the age. Took some persistence to get the price where I wanted it, but I got the full blue book on my trade and got them down a couple grand on the price which was already fairly reasonable. New would have been nice, but the payment would have been through the roof. Have to play with it tomorrow. It was dark by the time I got home. Want to get some pictures of the interior. It looks factory new. I am going to have to get the remote start put on. I am a huge fan of it, especially in the winter. 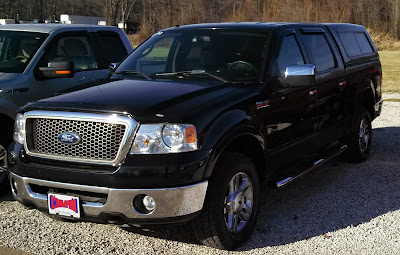 Came with a nice cap. Not sure if I will keep it on yet or not. Definitely keeping it for the winter. Have to see how big of a hassle it is to get on and off. Mileage will be quite a bit worse than I am use to, but I don't drive too far on the norm, and in the summer I have the Vette. Definitely has better pick up than my old SUV.