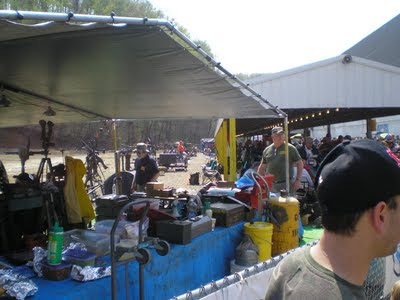 Day started out dark and stormy. I got up early to find thunder lightening and heavy rain. No surprise. They were predicting it all week. I went to mickey D's for a couple breakfast sandwiches and a coffee. I came home and waited to see what the weather would do. The rain subsided and the sun came out. I took a chance and headed out for the shoot. Upon arriving, there was a long line waiting to get into the parking lot. Not a good sign. Two hour drive to get there, I ain't leavin. It took half an hour to get to the parking area. The attendant in the lot (not the one directing traffic into lot, because that would have made sense) asked if I had four wheel drive. I am looking in horror at a parking lot that looks like the county fair four wheeling mud event. He says four wheelers are getting stuck and the tractors (farm tractors) can not keep up with the ones getting stuck.He then recommends going through the lot and exiting. I ask if it wouldn't make more sense using the turn around that he is standing next to and leaving area that way. He is dumb founded at the idea. Turn around and exit as opposed to sliding through the muddy pit to the exit on the other side. Who would of thought of that. After getting out of the pit, I headed back to the highway and after several laps, found a space on the highway to park and walked in. They were still directing cars down to the lower lot when I was walking in. I got to the top where you enter, and the upper lot that I was told was closed, was almost empty. It wasn't great, but better than the lower lot, as you could still see grass and there was no pooling water. Once inside, my day improved tremendously. The smell of gunpowder and the sound of machine guns in the air. It is really a great time. I always make the spring ones, usually don't make the fall one. Didn't find my hand guards for the krags. I will check tomorrow with a guy I know at the armory. This is the first show that I couldn't find my ammo for the garrand. I have a couple thousand rounds in enclips, so I won't run out for some time. But  I always pick up a couple ammo cans when I go to keep the supply up.I run low, I can always order from the CMP site. They have it back in stock, it is just more convenient to pick it up in person when you find it. They also have a supply of bayonets. Their guns aren't worth ordering anymore. You can usually do better at the gunshows than the scraps they get in nowadays. I was hoping on finding some of the match grade ammo for the 03 and the garand, but that was also missing this shoot. Usually they have skids of the stuff.

Tomorrow will be a great day as well. I can shoot the savage I picked up yesterday before working the spot shoot in the afternoon. They only have a couple left. Take the garrand back out as well. I always love shooting it, but now that I have the scope on it, I reallllly love shooting it. Suppose to be a nice day weather wise. Just need to hit the armory on the way there and check with my buddy. He may have access to a handguard for my krag, and he always has something I want. I bought my garrand and two krags off him. He has a danish krag and a beautiful enfield that I keep ogling.Since I just bought the savage, tomorrow will just be checking on parts and drooling over guns on table. That show usually has a guy that sells springfield items and ammo. So I will have to see what he has. The reloader there usually has krag ammo, so I will have to pick some up so I have some brass for loading.
Posted by RichD at 8:45 PM