New addition to the M1 family

A buddy at work told me about a .22 M1 Garand he saw at the local gun store. It is just a modern replica of a Garand in .22, but, it looks and feels cool. Had to have it. Used Ruger magazines, and I saw online where they have the extended magazines for it. They have a M1 magazine over it, which makes it look like a M1A. It will be a fun little plinker. I hit the gun show up again and picked up a case of 1000 9mm ammo. With the 800 from yesterday, I am now restocked for a while. If the drizzle ever quits, I can take the 9mm AR to the range for some fun. 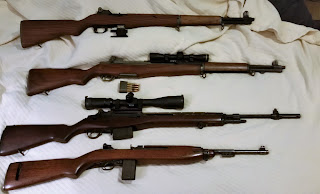 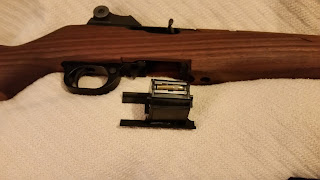 This is  a close up of the magazine on the .22 caliber rifle. They were out of the extended magazines, so I will hit up another store tomorrow to see if I can lay my hands on one. It was 67 degrees today, but drizzly. Suppose to cool off tomorrow for a bit. Back up again early in the week though. Hopefully it will dry up a bit. Want to get some range time in while I am off. I remembered to pick up some more ammo for my broomhandle and the m1 carbine while at show. Precision cartridge doesn't advertise them online, but they actually reload a lot of odd wartime calibers.