Spent the day running about shopping for a pressure washer. List of things that need cleaning has been mounting. Want to paint the fence and it is a mess. Thought I could just hose it and paint. Not. Throw in the moldy siding on one side of the house and some spots on garage floor, drive and walkway, time for a new tool. I had it down between two washers after hitting the top three box stores and sears. I wound up back at Lowes, where I started my search. The only boxed one they had that wasn't on top shelf looked like it fell from the top shelf. After looking for help, I snagged an employee from a couple rows over. He was stocking Christmas ornaments (yuck, too early to even think about yet). I told him what I needed. He tells me they are down already. I explain I would like one that didn't fall from top shelf. He looks rather put out and tells me he can get one down, but, it will take about a half hour. He stands and stares at me trying to see if this will be alright. I tell him he can go back to hanging ornaments, I will just go to sears. He waddles off.

I get back in my car and notice the driver in the next truck over is a bit overly hairy. 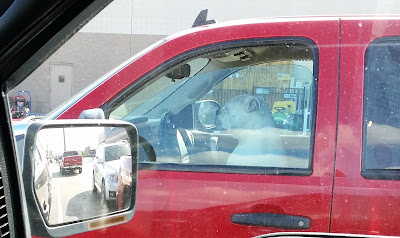 He didn't move at all, not even his head when I walked by. Looked like he was posing for the commercial with the driving dogs:)

I hit sears up and picked up a craftsman with a briggs and Stratton motor. Has about the same psi as the one I was going to get, I just like troy-bilt better. It is about $60 cheaper as well. I hit up the auction to see what they were selling tomorrow. They had nothing I was interested in so I will be blasting my fence tomorrow morning. I want to take a couple rifles to the auction house to go in their gun auction in December. Want to test the waters a bit. I get some good deals once in a while, but, usually the December one, being close to Christmas, people tend to go nuts on bidding. Last year, I was looking at a couple guns I was going to buy new and figured I could pick them up cheaper there. They went for a higher price than new. Figured I would gamble with a couple of guns I don't care for. Lever actions do quite well there for bidding. I have a Rossi I can't stand. It will be one of them going on the block. Most of the day will be cleaning the fence and siding. Probably try painting on Saturday. Figure after power washing, I will have to let it dry out good before painting it. Friday will be the machine gun shoot, weather permitting. Have a steam show to fit in there as well. Spot shoot at the club Sunday, maybe. See how everything goes. Lots happening this weekend.