Headed back up north to my cousin's youngest daughter's wedding. Still can't believe the little ones are grown ups now. Got up there Friday, early in the day and stayed at my brother's new house. Makes the back hurt just looking at all the work he accomplished since my last visit. Back yard is bush hogged down and actually looks like a well maintained lawn. Hard to believe how fast the grass filled in. Most of the dead bushes have been uprooted and disposed of. He even bought a brand spanking new tractor, and I got to drive it. Way cool. Has a bucket on the front, a mower underneath, and a snow thrower on order. Now if he can just put the cappuccino machine in (already comes with beer cup holders. The pole barn is huge. The toys one can put in that. It's nice to sit and watch nature walk by the front window. He has a beautiful view of a small lake out the back porch. You can enjoy watching the ducks and geese come in, without having the mess in your own yard. Quite a nice set up. 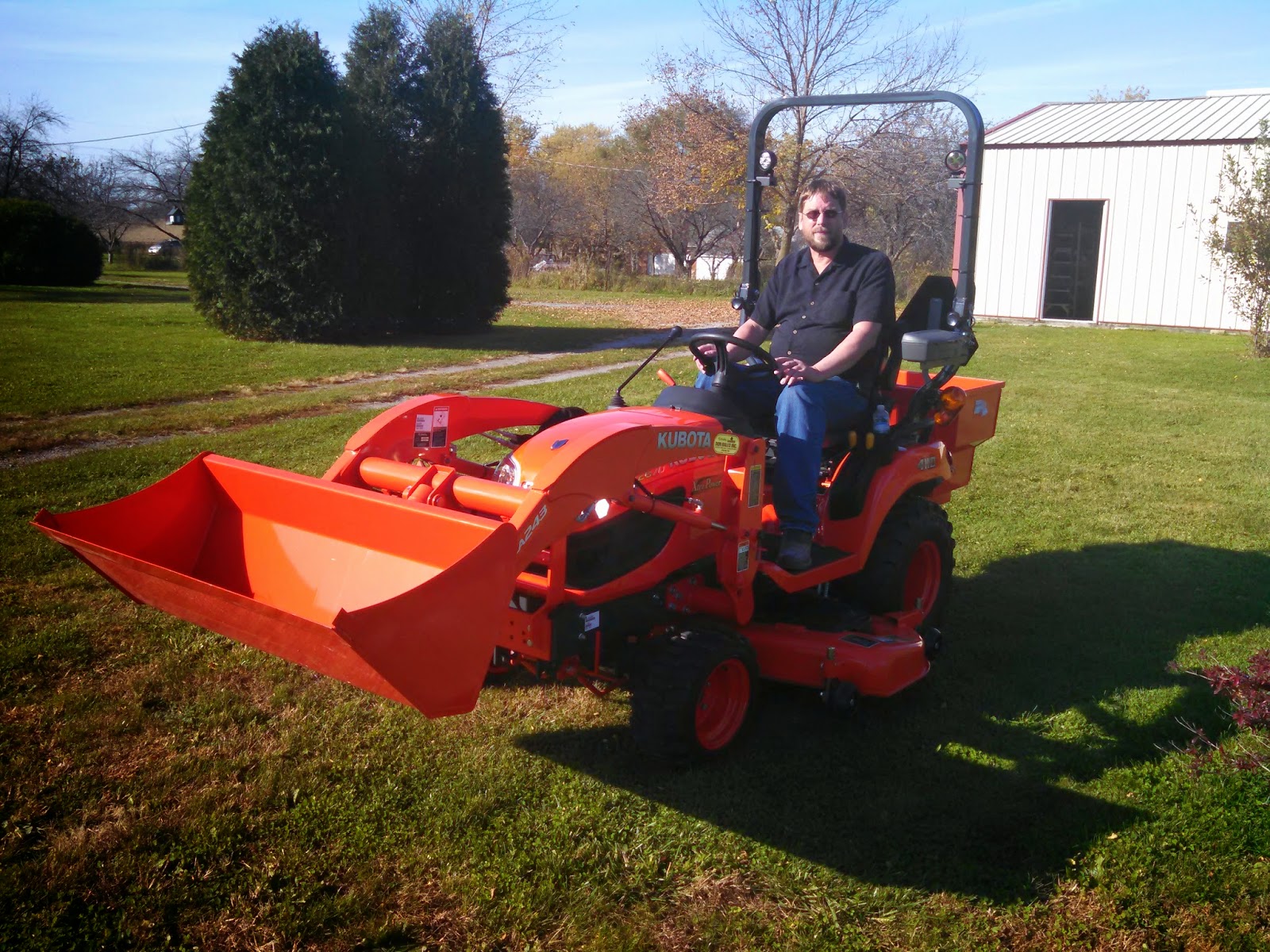 Pretty cool and multifunctional piece of equipment. Makes me want to go buy a bigger piece of property so I can go dig some holes:) Glad to see he got something dependable to do the chores. We are getting too long in the tooth to be out there digging and ripping by hand anymore. Besides, where is the fun in that.

Got to catch up with Og and his wife as well. It's always a blast to visit with them. We all went out to a Mongolian restaurant. It was awesome. You pick out from a wide assortment of various meats and veggies and sauces, take what you want, place by the chefs and they fry it up for you while you watch. If it had hooves, a beak, or swam, it was probably available on the buffet. Great eggrolls and deserts. I ate until I hurt, then nibbled a bit more. Didn't get to see the Oglet this time around as she is away at school, and doing quite well from what I heard. It's always a pleasure to visit with the Og clan.

Wish I could have stayed for breakfast on Sunday morning, but, the dog sitter has early pick up hours on Sundays and I like having him around. Didn't want to have to leave him there until Monday evening. He came back a bit on the dirty side, so he had a good time. Have to give him a bath after he recovers a bit. After getting home, he generally naps for the better part of a day recovering. They have their own private runs in their kennel. She also sets up pools for them to play in in the warm weather. Dog toys abound. Gives him a chance to play with other dogs for a while. He is generally pretty wore out when he gets home.

Went to the wedding, which was very nice. The Father who performed the ceremony was very entertaining. I enjoyed the whole wedding. Afterwards, we headed over to my Aunt's house to visit until the reception. My Uncle from out of town was visiting so I got to see them for a while. They both suffered the loss of their dogs over the last couple years, and now both have new pups they are contending with. My Uncle got another Lab which we haven't got to meet yet. My Aunt, who usually gets Brittany Spaniels, got a Boston Terrier, which is more of a Boston Terror. Silly thing reminded me of the Tasmanian Devil cartoon. Moved from chewing on one thing, on to another. It tried shaving my brother's beard with his teeth and proceeded to drool on his shoes. Cute little thing, but I don't know how my Aunt is going to keep up with the little cyclone. The reception was great. Got to catch up with most of what is left of the family. Food was great. Got to visit some with my cousins, which I normally only see when I go up at Christmas time.

Headed out for home right from the reception. Rather peaceful traveling at night. No traffic. Usually have speed traps set up along the way, so I held the cruise about eight miles over the whole way home. Made it within twenty miles of home and someone passed me like I was standing still ( I was doing seventy). Unfortunately for him, officer friendly happened to be traveling the opposite way. Startled me as the cop did a sharp U turn and wound up alongside me, lit the tires and chased the nut job down. Unmarked car, so I didn't know what was happening until the officer finally put his lights on. Got home about 1:30 this morning. Got a call from a friend telling me about a fleamarket today, so I hit that after picking Spike up and dropping him at home. Picked up a dozen files for two bucks. They are in great shape and made in the US as opposed to cheap imports. A little rust coloring, but nothing a wire brush won't clean up.
Posted by RichD at 2:34 PM