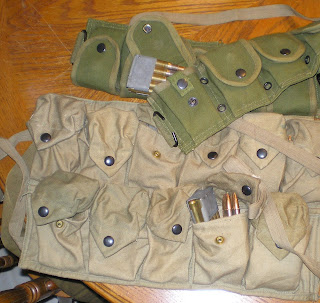 Weather was louuuuusy but still managed to have a good time and get some things done. I took the dog to the vet and dropped him off for his vaccinations and was on my way home when I stumbled upon the gun show going on at the armory. I usually am counting down to it and somehow it snuck up on me. They had a really nice assortment this time. I came close to buying my M1A on the cheap. They had an estate sale going on and had one that looked like it had never even been fired. One thousand dollars out the door. They wouldn't take a check and it was gone by the time I got back from the bank. They had some other cool stuff as well. I did pick up a couple of heavy duty bandoleers loaded with full enclips for the garrand on the cheap. They had some other nice guns, but they were priced too high for what they were.

Next stop was my buddies booth where I acquired my garrand a few years back. He had an Enfield that was in nice shape and the rifling was like new. I picked it up along with a cheap Sears Ranger .22 rifle complete with weaver scope. The .22 was only a hundred bucks, so it will make a cool cheap plinker. It looks like new and my buddy says it's a nice shoot. I stopped and drooled over the Krag he has on display as well. He usually has some nice looking lugers and other WWII German firearms on display.


They had quite a few new vendors there this time around. I picked up a cheap digital scale from a new reloader supplier that was there. I asked him if he carried the dillon presses and he said they are just starting to carry them. His price is the same as buying off the Internet without having to pay shipping. He had all sorts of powders, bullets and gear there ready for sale. One of the nicest reloading tables I have seen at  a little show. I think he will do well. Told him to give me a call when the dillons come in.

During the week, I pulled the steering column out of  the Mustang and soldered on the plug. I put heat shrink around the solder connection and taped everything up. Once the sheet metal work is done, I will install the new under dash wiring harness and the column. I received my new carpet for the mustang. The highly intelligent people at fed ex set the box near the door in the rain. Unfortunately they were not intelligent enough to put it next to the door under the roof. No, they thought it needed watering so they set the cardboard box in the rain. When I got home, all I had to do to unwrap it was pick up  the box. Carpet inside was damp. I can't believe it wasn't soaked completely through as it wasn't plastic wrapped at all. The sheet metal was under the roof, but the box was torn and some of the metal was sticking out. I e-mailed the store about the packaging and they did get back to me and will remedy the carpet as it wasn't quite what I ordered. It was suppose to have a hole for the shifter and didn't. I could cut it out, but I prefer to get what I order. They didn't put it in the rain, but I did recommend that they plastic wrap things such as carpet before boxing it to protect it from the environment ( and ignorant delivery personnel). Hope to have it all resolved before I need it. One more week and I am on vacation. My son is suppose to come down and visit for the week, so that will be nice. He wants to go to the corvette museum while he is down. Be nice to have someone to run around with and get a chance to see him again for a while. Take him down to the club to send some ammo down range as well.
Posted by RichD at 10:19 PM