My Truck is back home 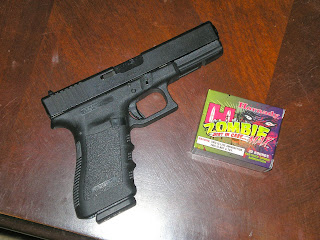 I am finally safe from the zombie attacks running rampant through the area. Hornady stepped up to the plate and filled the void. Now if only they had the silver bullets for werewolves in stock. Had to special order those. 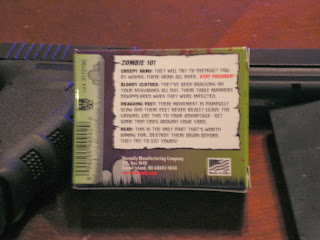 I couldn't resist buying a box. Went to the gunstore to pick up ammo on the way to the club and the owner was putting these up on the shelf. Picked up some ammo and headed off to the range. When I got there, I bumped into one of the engineers from work who was out with his brother and a couple of his little kids. Kids were siting in their rifles Santa brought them. I was talking to the guy from work and we were talking about what we each had brought out. I mentioned my Garrand and one of the little kids came at a run from the other side of the range. I found out he is really in to the old military rifles. I showed him the Garrand as well as the O3A4 I brought out. He wanted to see an enfield, but I had not brought any out. Told the dad to let me know when they were coming back out and I would bring more military rifles out.

We went out to cowboy town for a while and I let them try out the little .22 single action six shooter. They loved it. The .22 doesn't have the power to trip the targets, but you can still hear the plink which they enjoyed. I told them they could try the .38 if they wanted, but they were afraid it may have too much recoil. I will have to do some loads using the cowboy load formula, which has almost no kick to it, so the kids can try the other guns out. They are around seven years old, so they are still a little small. The engineers brother liked the club so much, he filled out an application on the spot.

I finally have my truck back. They said they fixed the speed control. I wont know if it works until my next Indy trip. The speed control would work for a long while and then just cut out and would not reset. They said the brake switch was causing that and changed it out. They worked on the remote start and it seems to be working now, so that is great. As for the transmission, they could not get it to rev without engaging like it was doing for me. They did do the fluid change and filter change which is a ridiculous $360 job and requires them to split the trans case open as there is no drain on it. It is in the manual to be done at 60000 miles, so to keep the warranty in place, I had it serviced. I will see how it does. If the trans gives me anymore problems, it will turn into a chevy pickup truck. I just hope it runs alright so I don't have a car payment for a while. Hope to get a few more years out of it.